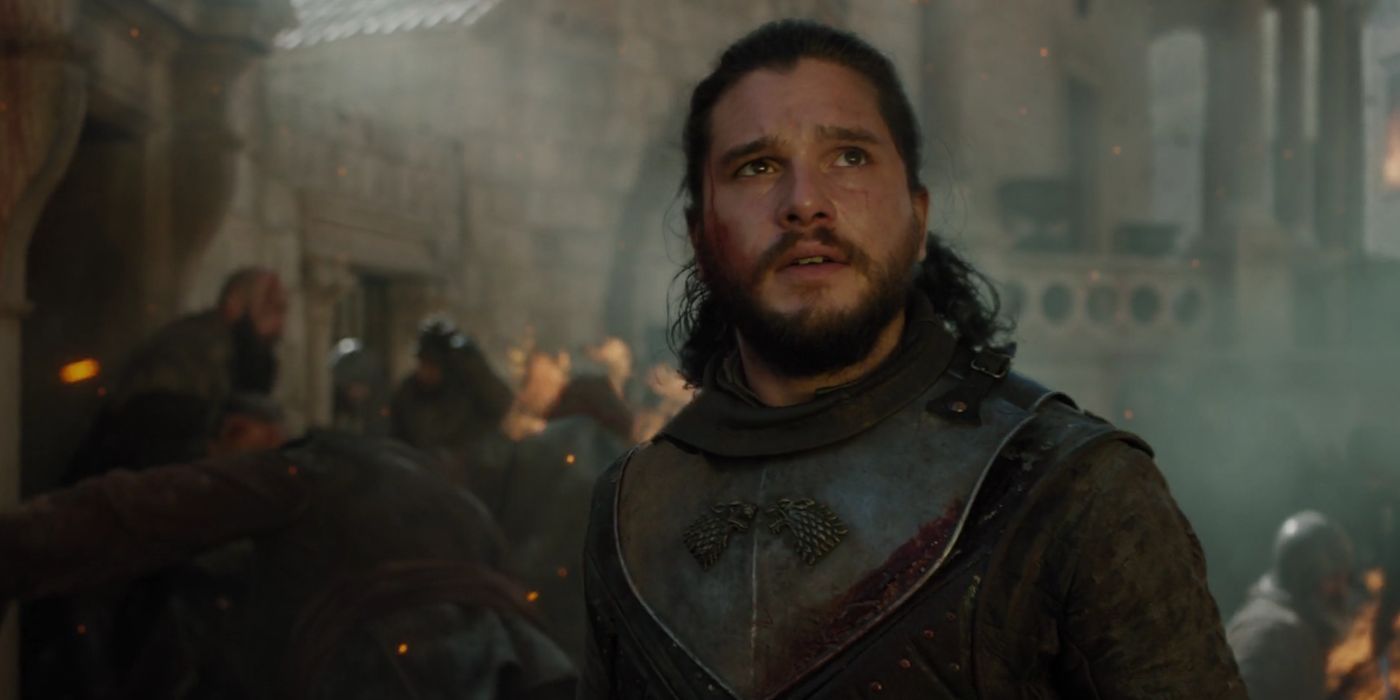 The Game of Thrones author confirms there is a Jon Snow sequel series in development, and that Kit Harington is the one who came up with the idea.

Game of Thrones author George R.R. Martin has confirmed the development of a Jon Snow sequel series exploring his life beyond The Wall after the destruction of the Iron Throne. Martin has worked with HBO to develop several other new titles set within the fantasy world of Westeros, including this year’s highly anticipated House of the Dragon. While most of the announced shows have been prequels to Game of Thrones, this new series stands alone as the only concept that directly alludes to potential returning characters, as this will take place following the flagship show’s end.

Last week, news broke that HBO is working on a new Game of Thrones series revolving around Kit Harington’s Jon Snow. Few details about the plot have been revealed, though it has been assumed that it will pick up with Jon following his banishment from Westeros. Harington is attached to return should the Game of Thrones spinoff move forward. The news sparked surprise and intrigue online, and since then, a handful of those associated with Westeros have commented on the project.

This now includes Jon Snow’s creator. Sharing a detailed response on his website, Martin confirms that the series – which currently has a working title of Snow – is in development, and that he is involved with the creative process, though he cannot share too many details without permission from HBO. Currently, Snow is in the scripting stage, facing numerous rewrites as the creative team works to finalize a first season. Martin also confirms that Harington originated the concept, and that his team is an active part of the development process. The author makes it clear that while there are people working on the show, it hasn’t officially been greenlit, much like the other Game of Thrones spinoffs. Read what Martin says about the series below:

Continuing Jon’s Game of Thrones story past its controversial series finale is a risky, but fascinating move. Game of Thrones earned an almost infamous reputation for the way the series ended, splitting audiences down the middle with praise and hate. A sequel gives HBO the opportunity to amend past mistakes and forge a new path for Jon Snow beyond The Wall. Ever since the news emerged, audience reactions have been swirling, exemplifying the dedication of the fanbase despite some soured opinions viewers held for Game of Thrones. Clearly, there is still plenty of interest in Westeros and its inhabitants.

The confirmation from Martin does not mean the Jon Snow project is officially HBO’s next spinoff series. However, it does create some encouraging public support for the concept and will increase conversations about Snow throughout the media. The more attention the project receives now could influence HBO one way or the other, giving Harington and his team a chance at exploring Jon Snow’s life after Westeros. Initial responses seem eager to venture further into The North, as some are already theorizing who could reprise their original roles and join Harington back in the Game of Thrones world. Until HBO pushes the project forward, though, Snow will only be a swirling sea of rumors for fans to ponder over.

Next: Game Of Thrones’ Jon Snow Sequel Is The Wrong Stark Spinoff

Taylor McIntyre is a Writer for the Screen Rant News team. Based in New York City, Taylor graduated from Tisch School of the Arts and has been pursuing her career as a writer and artist since graduating in 2020. Additionally, she has been an independent film producer to help create work through the difficult COVID-19 pandemic.

Born and raised in Los Angeles, her love for the entertainment industry started with a love for performing, creating, and bringing fantasy to reality. Now, she aims to create work that sparks conversation and encourages communities to come together in meaningful, joyful ways.

Mayweather-McGregor 2? There’s Indications It May Happen

Mayweather-McGregor 2? There's Indications It May Happen