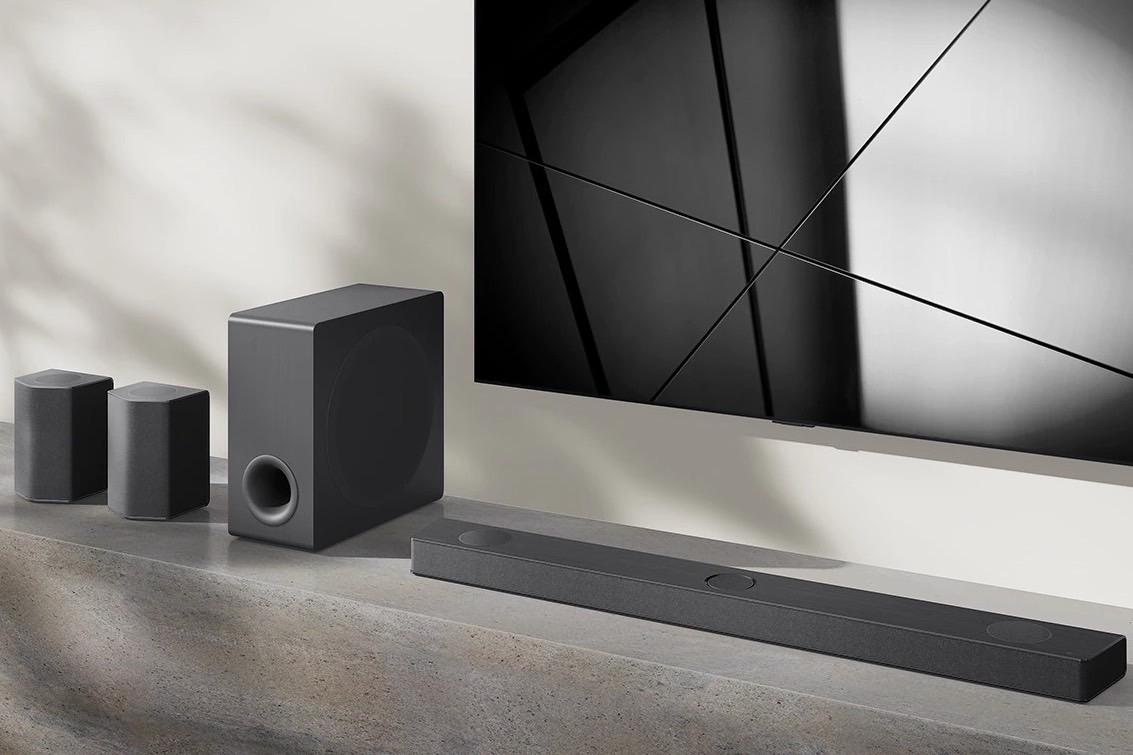 After giving us a sneak peek at its new 2022 soundbar lineup at CES, LG has finally released these home theater speakers. The prices start at $400 for the entry level LG S65Q 3.1-channel model, and then head sharply upward, topping out at $1,800 for its LG S95QR flagship soundbar — a 9.1.5-channel, Dolby Atmos-capable multi-speaker beast. All six new models, (S95QR, S90QY, S80QR, S80QY, S75Q, and S65Q) are available now on LG.com, as well as from select retailers like Amazon.com.

All of the new models offer a different set of features, but regardless of how much you spend, LG has included some common characteristics. Hi-res audio, with tuning by Meridian, is the key feature that unites these speakers. Soundbars tend to place an emphasis on delivering good TV sound, but LG has decided to put an equal emphasis on how these speakers work with music.

In some cases, like the entry-level S65Q, you’ll need to load your hi-res music files onto a USB drive to play them at their full quality, but as you go up the line, these soundbars add Wi-Fi connectivity, letting you stream lossless hi-res audio from compatible subscription music services like Amazon Music, or from your own network-stored collection of tracks.

These speakers offer at least one HDMI input that can passthrough 4K video with support for HDCP 2.3.

Each model is also equipped with its own wireless subwoofer and a dedicated remote control, and supports (at a minimum) DTS:Virtual X, for a more immersive surround sound audio experience even when the content you’re watching isn’t presented in Dolby Atmos, DTS:X, or Dolby 5.1.

Here’s a quick rundown of each model:

As LG’s flagship soundbar for 2022, you can expect a ton of features from the S95QR. The main soundbar is loaded with drivers and is quite capable of reproducing surround sound via front left/center/front right/surround left/surround right channels, but it’s also equipped with three height drivers — an unusual arrangement in the soundbar world, which typically only uses two height drivers.

That center height driver definitely adds to the S95QR’s Dolby Atmos immersion, but it takes its audio information from the high frequencies of the left and right height channels, so technically speaking, it’s not really its own channel as LG suggests in its naming for this product. Still, there’s more than enough going on in here once you add in the included wireless rear satellites, each with its own dedicated height driver and two directional side drivers. Throw in the wireless subwoofer, and you have an impressive, 810-watt peak power home theater system, and no speaker wires anywhere in sight.

The system is equipped with Bluetooth and Wi-Fi for a wide range of wireless music streaming options, plus it works with both Apple AirPlay 2 and Chromecast Built-in. It’s compatible with both Alexa and Google Assistant, so if you already own one of these smart speakers, you can control the S95QR with your voice. It offers two dedicated HDMI inputs, both of which can passthrough 4K, Dolby Vision, and HDR10, with auto low-latency mode (ALLM) and variable refresh rate (VRR) at up to 60Hz. All of that gets funneled to the bar’s HDMI ARC/e-ARC output.

An AI-based system will automatically calibrate the S95QR for your room, but LG also includes a huge number of sound modes and EQ adjustments if you want to change things up. You connect the S95QR to your TV via HDMI ARC/eARC or optical cables, but for those who want a truly wireless setup, the soundbar works with LG’s Wowcast system — an optional module that sends lossless audio from your TV to your soundbar, no cable required.

For the S90QY, LG has taken the S95QR and simply removed the wireless surround speakers. That leaves us with a little less immersion and a little less power (570 watts), but still a whole lotta sound from a single soundbar and a wireless subwoofer. You get the exact same main speaker, with the three up-firing height drivers, and all of the other S95QR features like Bluetooth, Wi-Fi, AirPlay 2, and Chromecast. But LG has removed one of the HDMI inputs, leaving just a single input that’s capable of passing through 4K, Dolby Vision, and HDR10, with auto low-latency mode (ALLM) and variable refresh rate (VRR) at up to 60Hz to the HDMI ARC/eARC output.

It works with LG’s Wowcast system and you can add LG’s SPQ8-S rear kit for an extra hit of immersion, but these wireless speakers do not have the up-firing height drivers included on the S95QR’s satellites.

You can think of the LG S80QR as a slightly less capable ,but far more affordable version of the S95QR. It comes with the SPQ8-S rear kit, so you get true wireless rear surrounds, plus LG’s triple-height-drivers on the main soundbar. Its a little narrower than the one LG uses on the S95QR and S90QY and it doesn’t pack as many drivers, but there’s still lots of total power (620 watts), and all of the great features from the S90QY. That includes Bluetooth, Wi-Fi, AirPlay 2, Chromecast, and an HDMI input with passthrough of 4K, Dolby Vision, and HDR10, plus auto low-latency mode (ALLM) and variable refresh rate (VRR) at up to 60Hz to the HDMI ARC/eARC output.

The LG S80QY is the S80QR, but without the SPQ8-S rear kit. But that might be a good thing. Pick this soundbar up and try it at home. If you like the way it sounds, you just saved some money, but of you don’t, you can always add the SPQ8-S rear kit later.

If you want a soundbar that can do more than merely give you better TV sound, the LG S75Q is now one of the most affordable ways to do that. With its discrete Dolby Atmos up-firing height drivers, you’ll get a much better Atmos experience than with standard two- or three-channel virtualized Atmos soundbars, plus you benefit from many features found in the rest of the 2022 LG soundbar range.

It has an HDMI input with passthrough of 4K, Dolby Vision, and HDR10, with auto low-latency mode (ALLM) and variable refresh rate (VRR) at up to 60Hz to the HDMI ARC/eARC output, hi-res audio, Bluetooth, and 380 watts of total power.

But there are some compromises: LG has removed Wi-Fi connectivity, so there’s no AirPlay 2, Chromecast, or the ability to stream music from you home network. The S75Q is also missing support for Alexa and Google Assistant.

As the most affordable model in the range, the S65Q still offers a left/center/right configuration in its small-footprint soundbar, which it uses to virtualize an immersive 3D audio experiences using DTS:Virtual X. The wireless subwoofer should provide plenty of low-end punch for TV audio that is way better than anything your TV’s speakers can manage.

Bluetooth is available for music streaming, and you get an HDMI input with 4K passthrough to the HDMI ARC/e-ARC output, which can be used to connect to a TV, or you can use optical instead.

Inside the Infighting on the January 6 Committee | National Review

HP has a Center Stage clone in one of its monitors