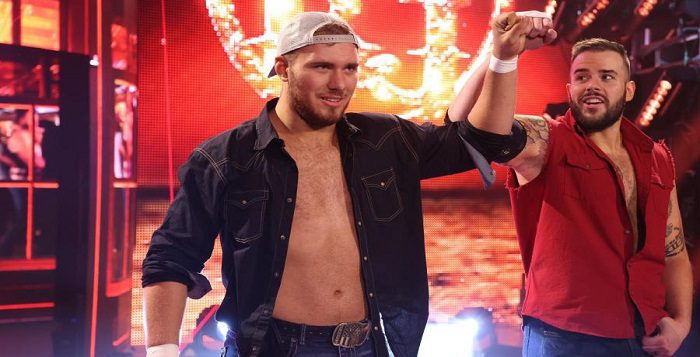 History has been made, twice! There are a lot of titles under the WWE banner but some of them are not the most well known. With so many wrestlers spread across so many shows, it is not easy to build up every championship there is. This time though, some of the titles had to be vacated due to an injury, but now we have some new champions to keep the titles going.

Ashton Smith and Oliver Carter vacated the NXT UK Tag Team Titles this week as Smith has ruptured his MCL and will require surgery. As a result, a fatal four way match was held this week, with Josh Briggs and Brooks Jensen winning the titles by defeating Mark Andrews/Wild Boar, Dave Mastiff/Jack Starz and Die Familie. Briggs and Jensen had been vying for a title shot before the match was made.

Opinion: This is the kind of thing that has to be done every now and then and that is still not a good thing. At the end of the day, the champs were injured and someone needed to take their spot. Brooks and Jensen have some more star power due to coming from NXT so let them get the titles for the short term before someone else can take them. It makes sense and it should work out fine.

What do you think of the move? How will the new reign go? Let us know in the comments below.

Thomas Hall has been a wrestling fan for over thirty years and has seen over 60,000 wrestling matches. He has also been a wrestling reviewer since 2009 with over 6,000 full shows covered. You can find his work at kbwrestlingreviews.com, or check out his- Amazon author page with 30 wrestling books.

Keep up with the LATEST WRESTLING RUMORS! Click here to sign up for the exclusive Wrestling Rumors daily newsletter, delivered right to your inbox.

WATCH: Roman Reigns vs. Seth Rollins From Money in the Bank 2016

Empire gives us preview of Viola Davis in her "magnum opus", new film The Woman King