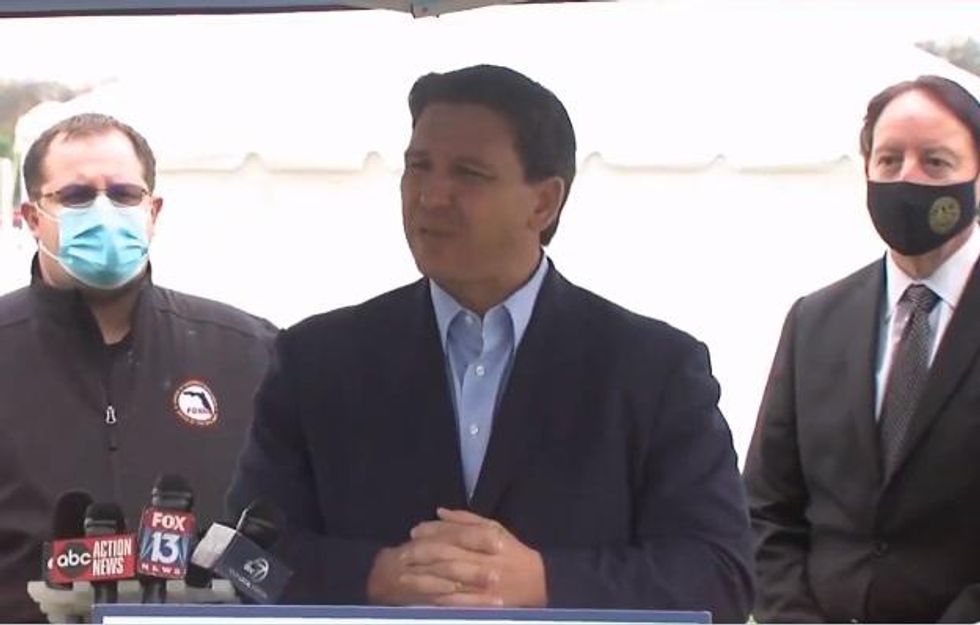 Hey, you know how Ron DeSantis and all these other white fascists around America are attacking drag queens and attacking LGBTQ people and calling them “groomers,” not because of any actual thing drag queens or LGBTQ people have done to kids, but just because they’re mad they can’t seem to groom their own kids to grow up to be little straight white supremacist trash bigots like themselves?

Yeah, it’s a thing we’ve been talking about, just a little bit.

Trump cracks down on deceptive fundraising by others using his name

And more than once, we’ve made the offhand remark that, you know, any adult who thinks their kid is safer with a Christian youth group leader than they are with a drag queen is an abject moron. Hell, the fascist Christian attack on drag queens and trans folks and gay folks is coming literally at the same time as a mindblowing report about decades upon decades of sexual abuse allegedly committed byhundreds upon hundreds of Southern Baptist church leaders.

Hey! Look over there! Sequins!

Yeah, fundamentalist Christian mommy and daddy, read through that SBC report, then defend to us why you’re just pretty sure YOUR child’s youth group leader would never do anything like that. Then tell us drag queens reading the fucking Poky Little Puppy to kids are the REAL danger.

Nah, fuck you, we’re not listening to your shit anymore.

And what did Chris Rice do, allegedly?

The Christian Post’s headline says “Allegations of grooming, sexual assault against CCM singer Chris Rice detailed in new report,” and for the first time this year, grooming appears to be the correct term.

Let’s start at the beginning. As the Christian Post story goes, back in 2019, there was a report that the (now former) pastor of a church called Tates Creek Presbyterian Church in Lexington, Kentucky, a man named Brad Waller, had committed “multiple” instances of “sexual misconduct” with “young men.”

(For readers both aware and unaware of Presbyterian church schisms and divisions, you need to know that Tates Creek is a PCA church. For those unversed, PCA is not the normal, nice Presbyterian church you see in cities, the kind that helps people and loves people. That is the PCUSA, and it is the mainline, original Presbyterian denomination in America. PCA stands for Presbyterian Church in America, and it is the largest of the bigot breakaway denominations that ran away crying because the PCUSA was too dang librul! Often when you hear about a Presbyterian church joining the PCA, it is — boiled down to its simplest explanation — because the PCUSA isn’t cruel enough to gays. This is a very important distinction to make in an article like this, for the simple reason that stories like this just aren’t that common in mainline or liberal congregations.)

Anyway, after the report on Waller came out, the Christian Post explains that Tates Creek hired the group that conducted that investigation, an evangelical outfit called Godly Response to Abuse in the Christian Environment (GRACE), to investigate other claims about a dude involved with Tates Creek sexually abusing and grooming an underage boy. And that dude was Chris Rice.

Per Christian Post, a guy who had been in the youth group at Tates Creek said that “Rice sexually assaulted him while leading worship at youth and college retreats for the church between 1995 and 2003.” Golly, right then when his big career was taking off! (Rice’s debut record came out in 1997.)

We should note, as the Christian Post does, that Rice never worked for that church. It’s just that Waller would bring him around a whole bunch, for these youth group and college retreats. The original complainant, referred to as Alan Doe, said he met Rice at age 13 or 14, and that “Rice initiated exchanging massages with him on TCPC retreats beginning at 14-15 years old.” And the gory details go on from there, all the way up to when the dude was in college.

But we don’t want to distract from our point, which is …

What Is Ron DeSantis Going To Do About This?

Sure, this didn’t happen in Florida, but we haven’t seen a culture war ambulance yet that Ron DeSantis isn’t willing to chase.

When he had his little temper tantrum over drag queens, he was responding to rightwing rumors and lies about something that happened in Dallas, far out of his jurisdiction. He said he wanted to “let kids be kids.” He was angry kids were “putting money in the underwear of” a drag queen, an assertion based on a rightwing hoax. “That is not something that children should be exposed to,” DeSantis huffed.

Yeah well, here we have a report of a contemporary Christian star using his position of power to groom and touch the junk of a kid who trusted him, which came after a report of that guy’s pastor friend sexually abusing “young men” from the same church, and then there’s the Southern Baptist report, and good fucking God, just look up on Google the stories of Christian leaders sexually abusing and grooming kids, and put ’em next to all the stories you find about drag queens.

We’ll bet solid American cash who ends up with the (much) longer list. (Hell, Dan Savage used to have an entire series called Youth Pastor Watch.)

So, Ron DeSantis, you care about protecting kids so much? What are you going to do about it, motherfucker?

When the kid-friendly drag show happened at Dallas Pride and all the mediocre white conservative Christian men started pissing their Underoos about it, DeSantis was all ready to have his staff look into this new menace, and an extremist Florida state rep was calling for an emergency session of the legislature to ban taking kids to drag shows.

And you sure wouldn’t want to take them to any contemporary Christian concerts, you never know what kind of vile things they’ll learn there.

Wonkette is funded ENTIRELY by a few thousand people like you. If you’re not already, would you pls consider being the few thousandth and one?

How Are Fake Live Video Calls Made? Here’s How to Spot Them