Supreme Court Declares Humans’ Only Value Is As Hosts For Guns, Babies 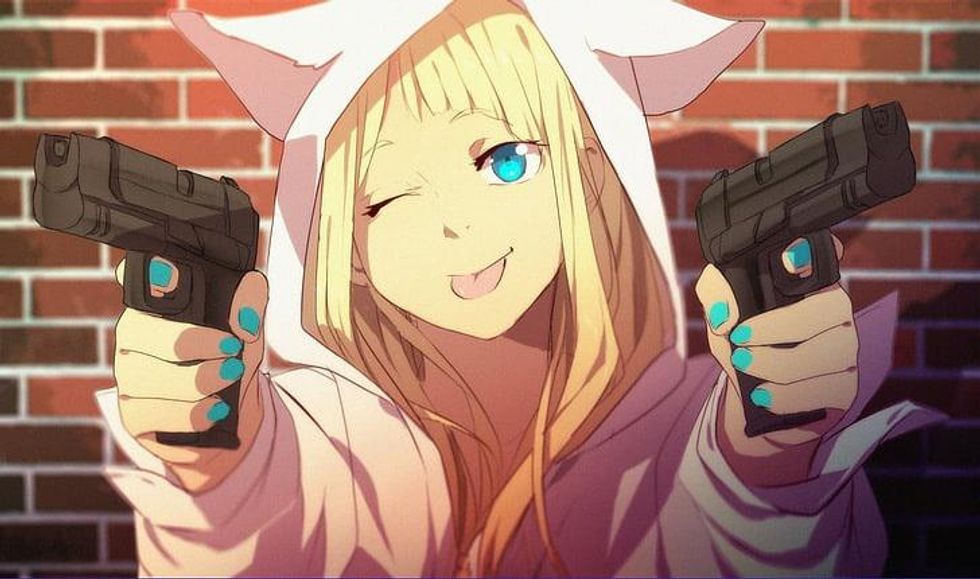 In an exciting step toward the beautiful day when every American is armed at all times, making crime impossible, the Supreme Court ruled today that Americans have a constitutionalright to carry firearms in public. The 6-3 decision in New York State Rifle & Pistol Association v. Bruen overturned a New York law that required people to demonstrate to authorities that they had a “proper cause” to own a handgun and to carry one in public. The majority opinion, written by Justice Clarence Thomas, held that the Constitution’s “Second and Fourteenth Amendments protect an individual’s right to carry a handgun for self-defense outside the home,” and that the New York law violated the Constitution.

Referring back to the last major ruling on guns, DC v. Heller, Thomas gunsplained that

The constitutional right to bear arms in public for self-defense is not “a second-class right, subject to an entirely different body of rules than the other Bill of Rights guarantees.” […] We know of no other constitutional right that an individual may exercise only after demonstrating to government officers some special need.

Legal analysts are divided on whether future Supreme Court decisions will bother with actual arguments or writing, or will be streamlined by simply having a member of the Court’s majority shoot the losing side’s attorneys.

The Associated Press notes that roughly a quarter of Americans live in states with laws similar to New York’s, including California, Hawaii, Maryland, Massachusetts, New Jersey, and Rhode Island. By some weird coincidence, those states include all five states with the lowest rates of gun deaths in the USA. (That would be Hawaii, Massachusetts, New Jersey, New York, and little Rhode Island).

Lucky folks in those states can now look forward to seeing people clad in tactical vests and patriotic underpants walking around with AR-15s and handguns at the ready, just like in Oklahoma.

Yr Wonkette has always liked to point people to Vox’s excellent (but now instantly obsolete) discussion of how Massachusetts has managed to have far fewer gun deaths thanks to its firearms law, many parts of which went right down the shitter today with New York’s statute. Thankfully, it looks like the Bay State and others affected by today’s decision can now look forward to per capita levels of gun carnage rivaling those in bastions of freedom like Mississippi, Wyoming, or Alaska. Hooray for equality!

New York Gov. Kathy Hochul told the AP the ruling is especially painful in her state right now, given the recent mass shooting in Buffalo, in which an avowed white supremacist killed 10 people in a Black neighborhood. Hochul said the decision “isn’t just reckless. It’s reprehensible. It’s not what New Yorkers want.”

Writing in dissent, and joined by Sonia Sotomayor and Elena Kagan, Justice Stephen Breyer stated the obvious: The Court’s decision is going to result in a lot more people dying, by “severely burdening” states’ efforts to limit gun violence.

Breyer begins his dissent (Page 84 of the SCOTUS decision PDF here) with a stark recounting of the ample blessings recently bestowed on a grateful nation by our Glorious Second Amendment (we’ve edited out the citations):

In 2020, 45,222 Americans were killed by firearms […] Since the start of this year (2022), there have been 277 reported mass shootings—an average of more than one per day. […] Gun violence has now surpassed motor vehicle crashes as the leading cause of death among children and adolescents.

Breyer goes on to argue that Thomas’s ruling fails to take into account any of the compelling reasons states may have for regulating firearms, and ignores the “nature or severity” of gun violence, leaving states “without the ability to address them.”

Thomas’s ruling leaves in place the Heller decision’s finding that states can prohibit guns in “sensitive places,” and says that the definition of such places might go beyond historical examples like courthouses, legislatures, and maybe even schools. But Thomas rejects New York’s contention that firearms can be restricted in all “places where people typically congregate and where law-enforcement and other public-safety professionals are presumptively available,” arguing that’s too broad. The decision punts on just exactly what should be allowed, leaving it up to future court decisions to “use analogies to those historical regulations” to define where guns can and can’t be limited.

Thomas further explained that New York’s law, more than 100 years old, was not “historic” enough to matter and some bizarre bullshit about the Stuart kings in 1600s England, upon which certainly all our constitutional law is based.

\u201cStriking down the ability for states to in any way restrict the carrying of deadly weapons on the basis of how a hypothetical Englishman may have felt during a twenty year period 300 years ago. This is genuine quackery. And its the law of the land\u201d

Breyer didn’t care for that at all, asking,

So where does that leave the many locations in a modern city with no obvious 18th- or 19th-century analogue? What about subways, nightclubs, movie theaters, and sports stadiums? The court does not say.

Well heck, probably best just to allow guns everywhere, because they are the only thing Republicans agree can protect us from maniacs with guns.

We’ll bring you Liz Dye’s more detailed analysis of the ruling tomorrow; for now, we’ll just note that research pretty consistently shows that in states that adopt the right to carry concealed handguns, violent crime increases. Also, with so many more guns being carried in public by semi-responsible gun owners, Right to Carry laws have been “greatly expanding the loss and theft of guns, and burdening the functioning of the police in ways that diminish their effectiveness in controlling crime.”

On the other hand, it makes the imaginary Founders who live in wingnuts’ heads happy, so there’s really not a lot we can do about it. Good luck!

Yr Wonkette is funded entirely by reader donations. If you can, please give $5 or $10 a month so we can keep you up to date on — jesus h. christ at the gun range — all of this shit.

L.O.L. Surprise! B.Bs Born To Travel is coming to PC and console | TheXboxHub